In this post, I discuss my ongoing experiment with temporarily eliminating alcohol from my diet. I use this experience to address a question: why do we find some forms of habit change easier than others?

As of today, I've been completely sober for over a month. I took my last drink at Seven's Ale House on October 13 with these fine folks: 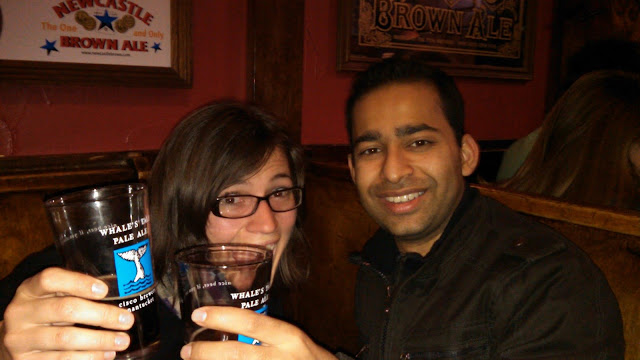 Why did I decide to do this? One of the takeaways from my self-tracking for panic was that I drink heavily and frequently: about three drinks per day, six days per week. The USDA recommendations are somewhat stricter:

This online questionnaire put my drinking level in context:

Many of us think our drinking is like everyone else's. In fact, less than 10% of the general adult American population and 16% of males drink more drinks each week than you told us you drink.

How much does the average American drink? Using the data from this Wikipedia article and some simple calculations:

About $ 1.3 $ drinks per day, or roughly half of what I was drinking during my two panic tracking periods. If you ask Gallup, though, they have a different number: $ 4.2 / 7 = 0.6 $ drinks per day. Rethinking Drinking, a pamphlet from the National Institutes of Health, provides yet another look at drinking habits nationwide: 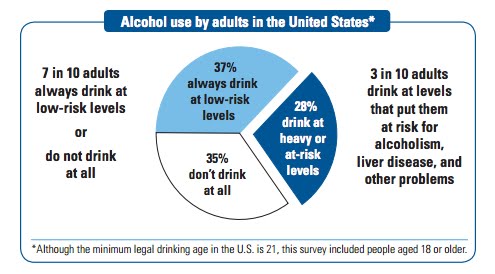 (This points out a general problem with data in the social sciences. Polling and measurement methodologies vary widely, as do the means by which data is presented.)

Regardless of which source I choose to believe, my data still places me above average.

There was also a more personal reason: in analyzing the panic data, I found that caffeine wasn't the only panic-inducing culprit. By training a maximum entropy classifier, I found that high alcohol consumption was predictive of panic attacks. Dissecting my data with bash supported this hypothesis: on days where I had a panic attack, I was usually drinking more than average both that day and the previous day.

So why elimination instead of moderation? Simple: moderation wasn't working. I'd been using the USDA guidelines as my goal during the two panic tracking periods, with little success.

(As it happens, I was also reading Big Sur at the time, which contains Jack Kerouac's harrowing account of delirium tremens. This may have provided some additional impetus in the decision!)

The received wisdom is that this sort of "cold turkey" habit change usually leads to failure: willpower is finite, we burn out easily, there are powerful social triggers, etc. Except:

I didn't find elimination harder. On the contrary, it was much easier than moderation.

I didn't stop going out to bars or visiting friends. I didn't smash all the bottles in the liquor cabinet or pour out the homebrew stash. I didn't enroll in any support groups or 12-step programs. What gives?

When I attempted to apply moderation, I found myself breaking down this consideration into a complex set of rules:

Taking the willpower as muscle metaphor one step further, this was a feat of endurance. Even though amount should be the only relevant factor here, each decision instance spawned a host of smaller sub-decisions.

By contrast, the elimination strategy required only one decision for each instance, and that decision was predetermined: No. It was a larger single decision, more akin to a feat of willpower strength.

In Charles Duhigg's conception of the habit loop, we can't truly break habits; we can only swap in alternate routines that connect the old cues and rewards.

This reminded me of a term my friend Travis Brooks used: EANAB, short for Equally-attractive Non-Alcoholic Beverage. There are delicious flavor syrups and ginger beers. Spa water and carbonation systems lend new life to boring dihydrogen monoxide. By making non-alcoholic beverages as exciting as microbrews and Sonoma wines, I tapped into my desire for exploration: here was a whole new range of beverages to discover!

As the Alcohol Screening questionnaire said:

Many of us think our drinking is like everyone else's.

While it is true that more educated people drink more, I encountered much less of a "drinking culture" among my friends than I had expected. In fact, by being open about my behavior change and the motivations behind it, I received a good deal of social support for this decision.

In both cases, data to refute the fear-expectation may be hard to find.

There are many ways in which my approach could fail to work for others:

These same factors made elimination an easier form of habit change for me. Although there are general principles of habit design, I believe that further exploration will reveal it to be a highly personal process.

It is one thing to say "replace the routine", and an entirely different thing to do so.

This is not to say that such exploration is hopeless; far from it. If self-tracking leads to mindfulness, perhaps this mindfulness will equip us to more effectively identify and modify the habit loops that rule our lives.

My goal is not lifelong abstinence from alcohol. Rather, I'm hoping that this will reset my baseline consumption, making it easier to practice moderation later.

This experience has also demonstrated that elimination is a viable choice for me; if I find that my moderation efforts are slipping, I can return to a period of elimination. Having proven strategies under your belt can be enormously helpful in making behavior change stick.